Young Artist With Something To Say About Hair Loss 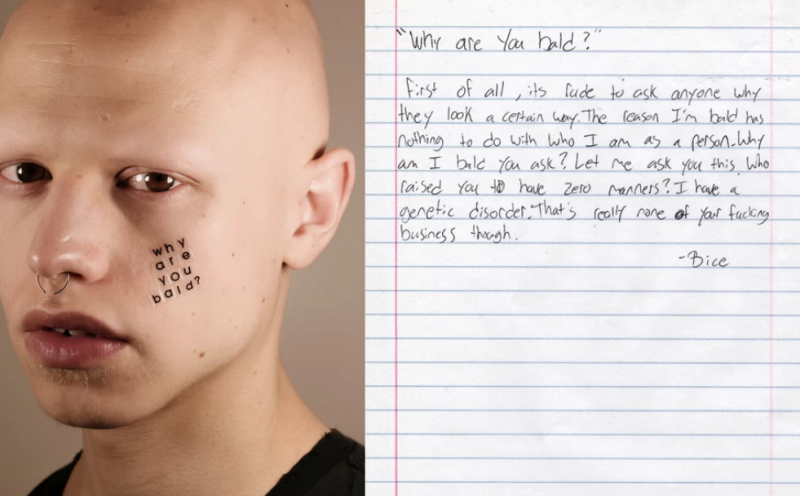 Peter DeVito is a young artist who made his name with unretouched pictures of people with acne, now he has broadened his attention to include hair loss. We look closer.

Peter is a young American artist, he turned 21 last month, who developed a following with his series of unretouched images of people with acne, the aim being to normalise the condition. He suffered himself and bought huge empathy to the work. But his latest project has seen him take on all manner of skin conditions as he broadens his scope and uses it as a platform to make some seriously charged political comment. His work on both projects used the faces of models with things that they have heard said about them or their condition superimposed onto their faces. It makes for striking images and powerful messages, Using the Kendrick Lamar line “I’m so XXXX sick and tired of the photoshop” on the face of a model with acne saw the image reposted in huge numbers. The new work is on much tougher ground and is altogether more aggressive in flavour, a young black man with a series of racial stereotypes on his face for example. But there is also a loud and proud, not to mention, aggressive  bald man…

Brice is a male model with alopecia totalis, meaning he has no hair anywhere on his body which has been provoking reaction since he was a child. He tells DeVito that he is often asked why he is bald… his response might not work for everyone – “Why are you bald? First of all, it is rude to ask anyone why they look a certain way. The reason I’m bald has nothing to do with who I am as a person.Why am I bald you ask? Let me ask you this: Who raised you to have zero manners? I have a genetic disorder. That’s really none of your XXX business though.”

We appreciate the efforts of Peter DeVito, and the ballsy attitude of Brice… an attitude that has seen him carve out a successful career as a model. DeVito’s is a name we will surely hear again, and we at HIS HQ are looking forward to seeing where this young man takes us next. We invite you to check out more of his work on his Instagram by clicking here.