What pain level to expect during your treatment 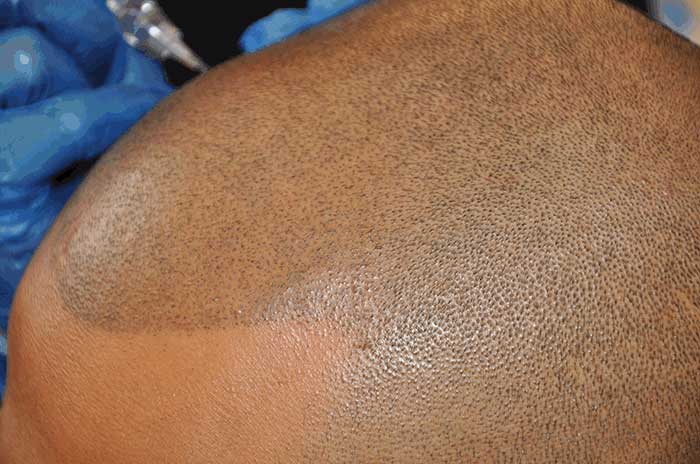 Most people ask at some stage what pain level they should expect during their scalp micropigmentation procedure.

Some people that have had a lot of tattoos and are well aware of the feeling when having one claim that the sensation as a whole is not similar at all and the intensity of the pain is also much lower.

So what determines the discomfort?

Some people have much lower pain threshold whereas others have a quite high threshold. The discomfort that is felt during SMP may be quite different and this depends on many factors. Not all of them can be mentioned but here are some of the most common ones:

The size of your hair’s follicles

The follicles will be about the same size as the pigment dots that are created during the procedure. If your original follicles are smaller, less pressure would be used and you would feel less discomfort. If on the other hand, you have bigger hair follicles you might feel a little more discomfort.

Where on the scalp SMP is being applied

It has been proven that the highest levels of discomfort are more likely to be experienced in the area of the frontal hairline, the crown and the temples.

The two most commonly seen problems in the condition of the skin are dermatitis and dryness. The first one means that there is inflammation in the skin of the scalp which makes the skin more sensitive. The other reason, the dryness of the skin, can easily be evaded just by using a moisturising cream for a few days before the session.

Your skin’s tightness and thickness

The tightness and thickness of your skin are another variable that defines how intense any discomfort might be. If you have a thicker skin the practitioner would need to increase the penetration of the needles so that the pigment would reach the derma. However, usually those with thicker hair also have reduced sensitivity which leads to the cancellation of these two factors.

Most clients usually bleed only a few drops of blood during the whole procedure and this blood is taken care of by the practitioner. However, some people might bleed more which demands more pressure and more dots in order for SMP to be completed and perfected.

The way you feel

High stress levels and anxiety increase fear and pain sensations. If you turn up relaxed and composed, you will experience much less discomfort.

Is it really bad?

Well as already mentioned, this is highly individual. For most people it is not a big deal at all. There is pain but it is certainly bearable. There are sometimes occasions when a client feels more pain, however this is usually resolved by taking a short break before resuming.

Most people say that they feel more discomfort during their first session. It is said that this happens because they still don’t have a developed expectation about what to expect. In subsequent sessions the pain should be reduced which is due to the activation of this mechanism.

Okay but what can be done if the pain is still a problem?

This advice should be provided by your physician or pharmacist as we are not able to provide specific recommendations, however many clients claim that painkillers reduce the pain when taken before the session. Some clients have used paracetamol, ibuprofen or codeine and report positive results.

Remember, always stay calm and arrive composed and fed. Keep the skin on your scalp healthy and well moisturised before each session. Above all, remember this is a positive step you’re making so focus on the end result and you’ll feel a million times better.

Previous Post
Is Didier Drogba suffering from traction alopecia?
Next Post
Looking for a hair transplant surgeon in Houston?