What Are The Limits Of Hair Transplantation? 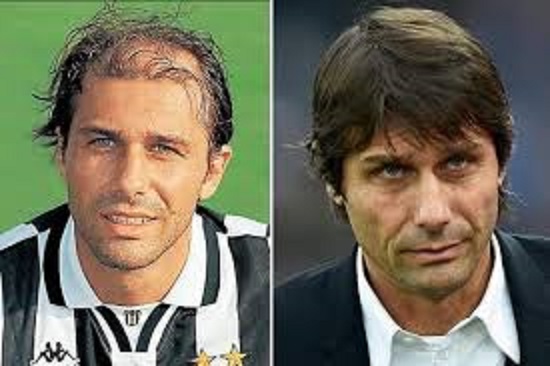 A recent article praising the quality of a celebrity hair transplant stopped us in our tracks, we take a closer look at just what is realistically achievable for a hair transplant… and what is not.

As a player, Antonio Conte was a legend. Playing at Juventus, Italy’s senior club, he won 5 titles, and every cup tournament possible, including the Champions League, club football’s most competitive competition.

As a manager, Conte set out on his career in the Italian lower leagues. He clearly bought the same qualities he showed as a player to his new role and won promotion as well as manager of the year. That talent would bring him to the attention of the club he had represented so successfully as a player and, as manager of Juventus, he led them to three consecutive Italian titles. From there he would be tempted to Chelsea in the English Premier League, the world’s most competitive. He repeated his success and took the title in his first season followed by the FA Cup, the sport’s oldest cup competition, a year later. Earlier this year he returned to Italy as manager of Inter Milan.

As a professional footballer, Conte had to endure the pain of hair loss at an early age in the full gaze of his adoring public. Once his career was finished he took the perfectly understandable decision, like so many others, to do something about it. No doubt he spent his time searching for hair growth solutions that actually work before deciding on something more permanent… and quicker to achieve an end result. Essentially, to get to where is today his choice boiled down to one between a hair transplantation procedure and a hair system of one sort or another.

For us, his choice was, very clearly, to go for the system. While a top surgeon, with the right tools and canvas to work with, can produce a convincing hairline (witness James Nesbitt), what still remains beyond them is to take a Norwood 5/6 client and provide him with the tumbling, full fringe we see on Antonio Conte. His search for a hair loss solution that actually works will have told him that there is plenty which can be done. Though when Conte was doing his search, around the year 2000, some of the more modern treatments were not yet known to science.

Ultimately, that choice would have boiled down, given his clear desire to return to a full head of hair and to turn the clock back over a decade, to a straight one between transplantation and a system.  But any honest surgeon would have given him a clear picture of the maximum achievable, and it would have been substantially less impressive than the youthful mop he now sports.

Say What You See

When we picked up an article proclaiming the quality of Antonio Conte’s hair transplant we were taken aback, how could anyone with any experience of hair loss seriously think this was the work of a surgeon? The answer was nobody. In fact, the article turned out to be a well presented but shameless advert for the work of an Indian hair transplant business.

There is some wonderful work being done by hair transplant surgeons. For the right client with realistic ambitions, the results can be wonderful. But articles like the one proclaiming Conte as one of those clients only serve to undermine that good work. Anyone considering surgery would be well advised to perform due diligence. See the original article here.

Previous Post
Elevated Sunburn Danger For Bald Spots
Next Post
Is This The Hair Loss Cure We Have Been Waiting For?