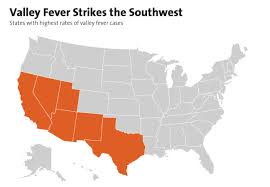 If your holiday sees you heading for the West Coast of America we have a hair loss warning for you. Read on… African Americans, Hispanics, Phillipinos and Native Americans all have an increased genetic vulnerability to the fungus.

So what is valley fever? When you learn it is primarily found on the West Coast of the United States, California and Arizona being particular hotspots, you might be forgiven for thinking it is a stress related condition bought on by working in the high tech industries. You couldn’t be further from the truth. Rather than a modern lifestyle illness this is an ancient fungal disease to which African Americans, Hispanics, Phillipinos and Native Americans all have an increased genetic vulnerability to the fungus. It lives underground, just beneath the surface, in dry desert soil. When the ground is disturbed by activity, machine animal or weather, the spores can be lifted into the air and breathed in. If the spores are lifted during a dust storm the spores can be spread for hundreds of miles.

Most people will recover fairly quickly from the flu like symptoms, for many though complete recovery might take months. If you allow your condition to deteriorate, in a case where you don’t recover on your own, you may develop a nasty long-term form of pneumonia. In the worst cases the fungal infection can spread beyond the lungs and cause additional problems… and this is where the risk to hair comes in.

Is The Cure Worse Than The Ailment

There are a range of possible complications when the fungus moves out of the lungs and into other parts of the body. At the top end they include meningitus. Since this means that there is a potential outcome that involves the risk of death it is fair to conclude that some side-effects might be acceptable in the treatment.

Flucanazole is the preferred treatment route for persistent valley fever in patients. It does come with a decent spread of side-effects however. Some of which are pretty unpleasant, cracked lips and nose bleeds among them. But surely the worst is the potentially severe hair loss that can even affect your eyebrows and eyelashes – which must come as a terrible shock to someone who is already suffering badly from the valley fever.

So if Vegas, LA or San Fran are on your list of destinations, be aware. The fungus extends down through Central America and into much of South America too. Stay in during dust storms and avoid gardening on your vacation would seem to be sensible advice.