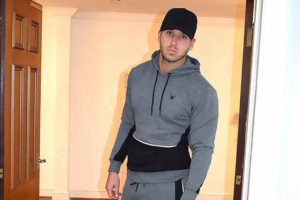 TOWIE star, James Lock, has recently revealed the results of a hair transplant, but not everybody is happy about it. After posting a rather gruesome picture taken after the procedure, his fans have taken to social media to berate the star for undergoing a procedure he clearly didn’t need.

The main criticism Lock has received after admitting to the transplant, it that he’s promoting unnecessary, drastic surgery. The 31-year old hasn’t shown any signs of losing his hair, at least not in photos anyway. So, why did he feel like he needed a transplant?

It appears Lock didn’t like his receding hairline. Although the hair on the scalp was healthy, thick and full, the TOWIE star felt self-conscious about the size of the forehead. However, was surgery really the only way to solve the issue? Not according to one fan…

“When you sweep your hair off your forehead 24/7, it can cause the hairline to recede. Get a shorter cut and watch it grow back, surgery is so drastic”.

They had a point – a shorter cut could have taken the focus away from the forehead, giving the hairline chance to grow back. In Lock’s case this could have happened so surgery definitely wasn’t needed. However, that’s not to say hair transplants can’t be a good option for those who really do need them.

What alternative could Lock have opted for?

As Lock’s receding hairline was only likely a temporary issue, there were some alternative, less drastic treatments he could have opted for.

SMP could have been a much better option. It works to shade balding areas, with tiny pigments of ink inserted into the scalp to mimic hair follicles. It’s long lasting, affordable and minimally invasive. It also a very low maintenance option.

Overall, those with otherwise healthy hair, should always think twice about undergoing a hair transplant. Alternative treatments such as SMP are safer and ideal for cases of temporary hair loss.

Previous Post
Could Ayuverda be the Answer to Hair Loss?
Next Post
Minoxidil – What You Need To Know