Topical Spironolactone is a cream designed to help those suffering from hair loss. 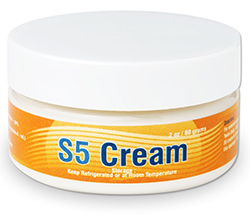 Many consider the use of  both Propecia and Topical Spironolactone together as a highly effective way to protect your hair from further loss.

Spironolactone is marketed under a variety of brand names, including Aldactone, Novo-Spiroton, Aldactazide, Spiractin, Spirotone, Verospiron and Berlactone. Spironolactone is also a diuretic, and is therefore made available in forms other than a topical cream, and is not always intended solely as a solution for hair loss.

How does Topical Spironolactone work?

Hairs in certain parts of your scalp have been genetically programmed to respond to DHT. Whilst Propecia blocks DHT from forming in the first place, Spironolactone blocks the remaining DHT from attaching to your follicles.

To explain, hair follicles develop receptor sites. DHT binds to those receptors and tells your body to begin rejecting the follicles. The reason for this isn’t totally understood, but the solution is simple. Propecia stops DHT from forming, and Topical Spironolactone stops DHT from attacking.

What results can I expect from Topical Spironolcatione?

Provided the user has realistic expectations, it is likely that many people will have a positive experience using a Topical Spironolactone product. The science certainly stacks up.

Bear in mind however, that using the cream on totally bald areas of scalp will not yield results, as the follicles will be beyond repair. As with Rogaine, this product only benefits areas that still have active hair follicles remaining.