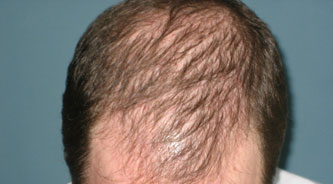 Male pattern hair loss is a genetic condition that takes on a particular format and can easily be recognised. 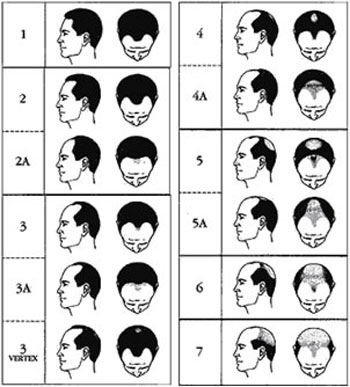 Although more predominant in men, it can happen to women as well and is known as female pattern hair loss but their results are not the same. They are more likely to have thinning hair and maybe the odd bald patch. There are different stages to the pattern and can start as early as their late teens which can be devastating for some. Some men find ways to encourage hair growth whilst others give up and shave to make themselves completely bald.

Receding and thinning of the hairline or all over thinning is patterned, whereas loss of hair in patches on the scalp is unpatterned. Patterned hair loss normally starts with a receding hair line with the hair receding on either side of the head above the temple. The middle then starts to recede and a small bare patch on the crown will appear. Over time the top of the head will lose hair until it looks like a horseshoe with thick hair remaining round the sides and back of the head. Gradually the sides and back will get shorter but rarely disappear altogether. This is the time many men decide to shave it off altogether.

The dermal papilla is the part of the hair follicle where the growth of hair starts and needs the minerals and vitamins to help with the growth. It draws the nutrients from the skin’s blood capillaries but if DHT reaches the papilla it is unable to absorb sufficient nutrients and the hair follicles eventually shrivel and die.

If the receding hair is treated early enough there is a possibility of slowing the hair loss process down and encouraging new growth. There are two medically approved treatments available for men called minoxidil and Propecia. Minoxidil is a lotion applied directly to the scalp on a daily basis to help stimulate the circulation and encourage more nutrients to the follicles and improve hair growth. Propecia, taken orally, contains finasteride which helps to inhibit DHT and therefore prevent further destruction of hair follicles, encouraging regrowth. It can take up to 3 months for any results to be seen and these are not permanent solutions. Both medications are linked with side effects, in fact the side effects associated with Propecia are both severe and commonplace.

At one time men could be seen with ‘comb overs’ to cover the loss of hair on the top of the head. Hair was left to grow long on one side then literally combed over the top. This is not seen so much these days as alternative ways are looked at. Toupees were another not so successful way of covering the bald patch. They are a piece of hair that just covers the bald patch but would often blow off in wind and not be a particularly good match. Wigs are another way to cover baldness and today they are made much better. Real hair can be used, the backing is a lot more flexible and they can be worn at all times including sleeping and showering.

The only permanent fixes are transplant surgery, and scalp micropigmentation. For more information about these options please see the links below: