Potential side effects of minoxidil use 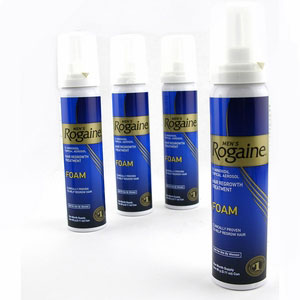 These side effects include complaints such as an itchy scalp, along with acne, headaches or lightheadedness, low blood pressure, chest pain, decreased sexual desire or partial impotence, numbness or tingling in parts of the body, blurred vision, or rapid weight gain.

Many would say that’s a lot of adverse effects to potentially go through just to fight off a bit of baldness, especially when considering Minoxidil doesn’t positively work for everyone.

Some have wondered, is there an alternative, or another way to administer the drug that avoids the side effects? Makers of anti-hair loss products have more recently devised additional formulations for Minoxidil such as topical applied foams, yet the compound still delivers it efficacious effects on the follically challenged.

Generally speaking Minoxidil is a highly safe treatment, but that long list of theoretical or rare adverse reactions has a barrier for many people.

Minoxidil lotion for hair loss thus paradoxically has the distinction of being a safe drug with no actual known side effects when applied in lotion or foam form, yet because of the history of side effects established for its clinical trials as a pill, still has to be associated those potential effects anyway. Users of the lotion can have the peace of mind in knowing there are no established reports of safety issues with the lotion, but have to be kept aware of the risk of the traditional format in case they begin to emerge in the topical user population.

The lotion format has other benefits, including affordability (compared to the brand-name Rogaine drug), and use in the paper form with other agents that can assist in arresting hair growth or growing hair. For example, according to some doctors use of both Rogaine and Procepia may be best for overall results in stopping hair loss (although the side effects of the latter drug are a separate issue). Using a lotion format for one or both of these agents reduces or eliminates the side effect problem, while permitting the delivery of both compounds to perform their work.

Whether one is using Minoxidil in pill or topical form, it is important to note that the main action of the compound is to stop or interrupt hair loss, not to by itself trigger hair re-growth. Once a person stops using the product for any other agents that prevent natural hair loss (through normal aging, genetic or family history, stress or other factors), hair loss will likely resume, just as if someone had unpressed the “pause” button.

Other natural protocols for maintaining healthy hair still apply, such as eating a healthy diet, avoiding smoking or other activities that can impair blood circulation, natural supplementation using products like Provillus, and so on.

The administration of topical forms of Minoxidil is not known to cause side effects, but those allergic to one or more parts of the compound, as with all substances, should avoid use or exposure to those elements known to cause a severe reaction. Among severe allergic reactions possible to occur are rashes, hives, itching, swelling of the mouth area or face, fainting, shoulder or other upper body pain, heart rate problems, difficulties with breathing, tightness in the chest area, or vision problems.

Again, topically applied Minoxidil is not associated with any common occurrence of the above allergic side effects, and is generally well tolerated compared to Minoxidil pills, which do have an actual (but rare) track record of actual cases of adverse reactions. One key to the low risk nature of the compound taken in this form is the minute amount of active Minoxidil that gets absorbed through topical news – one test comparing serum levels from either pill or topical methods found that oral intake produced an amount in the blood at least 15 times the amount derived from the topical application.

One caveat to keep in mind about this data is that there has been limited testing of topical Minoxidil to see if it in and of itself poses a risk to populations with existing medical conditions. According to the editors of Consumer Union’s the New Medicine Show, “topical Minoxidil has not been tested in men with cardiovascular problems, and many physicians suspect it might be hazardous for that group. Since cardiovascular problems increased with age, some experts caution that any risk of side effects from Minoxidil is likely to be higher and over managing a younger group.” So while no adverse effects may be encountered or observed by the user, this does not prove that side effects will not emerge as the subject ages.

Currently the FDA has approved of a 2% topical solution of Minoxidil is the standard concentration of the compound in that format. It is primarily used currently for its role in hair loss control, but also can be prescribed as a means to curb hypertension. At present, the main effect most commonly reported is a greasy feel to the product, which some do not like. Those experiencing problems or discomfort with topical formulations are best advised to return to using the traditional pill forms, or to try a different product relating to fighting hair loss.

To summarize, topical Minoxidil is a safer version of the compound for almost all consumers seeking to experience the benefits of it blocking hair loss without the same degree of risk of side effects associated with injecting it as a pill. Adverse reactions using this format of the drug are uncommon orioles unreported, although additional research may be needed to clarify if those risks persist even after topical application. Administration of Minoxidil in this form increases safety factors such that additional anti-hair loss agents can be used with it, although the individual side effects of those additional compounds should be considered.