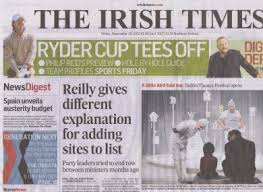 Trish Murphy, a psychotherapist, hosts a letters page in the Irish Times. A letter from a couple of anxious parents regarding the devastation wreaked on their son’s life by his hair loss was a tough read… we look closer.

Trish is the resident psychotherapist at the Irish Times, a daily broadsheet in the Republic of Ireland with its headquarters in Dublin. In her letters page she answers questions sent in by members of the public on issues affecting their mental wellbeing.

A letter published, from his concerned parents, detailed the tragic history of their son, now 33 years old. They told Trish that he lost his hair at the challengingly young age of just 16. Unbeknown to them he went through several unsuccessful transplant procedures… earning, they said, good money as a qualified professional. His situation now is that he has transplanted hair growing on the front of his head but that the damage and scarring at the back means he describes himself as having ‘half a head.’

Their son is now in a state of severe depression. He has not worked for three years and, having spent all his money, has become lonely and dependent on coffee and social media.

The desperate parents arranged for him to have an appointment with the family doctor, described as sympathetic, with a view to paying a fee for a consultation at “an expert hair clinic.” Unfortunately, their son backed out of the doctor’s appointment claiming that he was not going to be told anything he did not already know.

The son has a plan, unfortunately it is not very sophisticated or practical as he intends to wait for five years in the hope that transplant techniques will improve to the point where he can be helped.

The sensible advice from Trish was to stop focussing on a transplant as the possible cure, instead treat the depression. Get him back to work, maybe with some simple local volunteering to begin with.

We can only hope that his time spent on social media will mean that, at some point, he will discover the power of scalp micropigmentation and it’s ability to transform lives in difficult situations like his. Remedial work on transplants that have gone wrong is bread and butter for the team at HIS, treating even old and keloid scars and improving their appearance is entirely possible. There is absolutely no reason why a young intelligent man should need to suffer like the son of these poor, desperate parents.

You can see the original letter, and full details of Trish’s reply by clicking here.

As a parent they have my sympathy, as a man who lost his hair in his teens I have empathy for their son too. But as a writer on all things hair loss for many years I know it is not necessary to suffer.

If you would like to discuss your hair loss situation with one of our team of friendly experts, simply complete the contact form at the side of this page, or click here to find your nearest clinic.