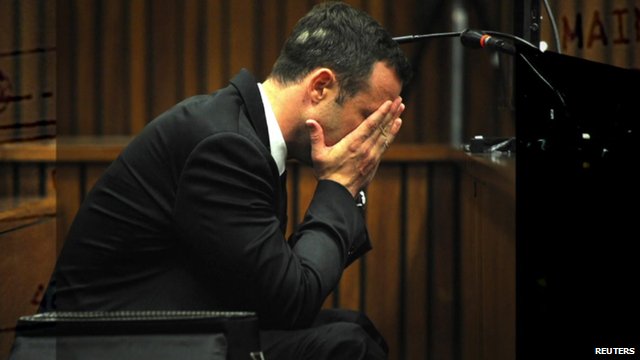 In 2012 Oscar Pistorius was at the top of his game. Taking part in both the Olympics and the Paralympics, he was synonymous as being the man who was on fire in both games, and not to be messed with on the track. Cue 2013 Valentines day in Pretoria South Africa, a murdered Fiancé and an Olympic medalist on trial for her murder. Whether you believe he is innocent or guilty, it’s a pretty long way to fall from the pinnacle of sport.

In 2014 the trial is still underway. The blade runner as he was formally known is seen to be ageing above his 27 years, and was spotted on his way into court on 5th May with greying cropped hair and noticeable patches of probable stress-induced alopecia to the front and right side of his head after the trial was back on track after a break for Easter.

Whether you believe or not that he is guilty of the murder of Riva Steinkamp, or is simply a grieving fiancé following a tragic accident and the loss of his love from a knee jerk reaction (excuse the pun) for which he will have haunt him for he rest of his life, you can’t help but feel sorry for Pistorius.

For those who feel that the South African medalist plotted the assassination of Steinkamp, the one question, why would Pistorius be losing his hair? Stress-induced alopecia is very common and normally takes the form of alopecia areata, usually visible in round bald patches in random areas of the scalp. Alopecia areata often goes away on its own, however for many people the condition is a lifelong blight and further expansion of the bald areas is also common. Occasionally morphing into full blown alopecia totalis. Or in layman’s terms, a full loss of all head hair.

A number of medicinal remedies are available for the treatment of alopecia areata, however their effectiveness is hit and miss at best. Treatment options include:

The best course of treatment depends on the specific circumstances of the individual concerned. Although it is generally acknowledged that treatment is on going and not a quick fix. The nature and unpredictability of the options available cause many sufferers to opt for more immediate solutions such as a hair system or scalp micropigmentation.

Depending on the span of the trial, we could see Pistorius’ hair loss played out through the media as it is being closely followed around the world. We can’t help but wonder, if guilty or not guilty, we will see the former medalist address his loss with any of these treatments, or if indeed he will show the world his stress and frail state of mind play out through his condition.

Although many top scientists are still investigating whether alopecia can be pinpointed to the stress and trauma an individual goes through, no-one knows for sure what the precise triggers are as it has never been medically proven beyond any doubt. With the stress and trauma that Pistorius has gone through over the last 15 months, it would be hard for anyone to throw out the notion that his alopecia has been caused or exasperated by the death of his fiancé and the trial he has been the centre of since her death.