The Norwood Hamilton Scale is a way to measure the extent of male pattern baldness, and is the generally accepted standard when describing hair loss in general.

Today’s Norwood Hamilton Scale originated with Dr James Hamilton in the 1950s who developed the baldness classification system, which was later revised by Dr O’Tar Norwood in the 1970’s by modifying the stages and adding 3a, 3 vertex, 4a and 5a.

Men typically lose hair in several patterns. The most common are receding at the temples, on the top back of the head known as vertex, and diffuse thinning where hair over large areas begins to thin, without a specific change to the hairline. Combinations of these types of losses also occur. The following scale can be used to categorise your level of male pattern baldness.

The further along you are on the Norwood scale, unfortunately the fewer options you have. At levels 5 and higher, the use of treatments such as minoxidil or finasteride becomes pretty pointless. In such cases, the most viable solutions are to have a hair transplant, wear a hair system or undergo an MHT treatment.

Very minor or no recession of the hair line, therefore no need for treatment.

Triangular and typically symmetrical areas of recession at the front temporal area.

Hair loss remains ahead of a line several centimeters in front of the ears. Hair falls and may become less dense in the central front part of the scalp. Initial signs of baldness are becoming evident. 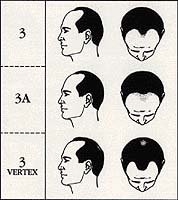 This represents the lowest extent of hair loss considered sufficient to be called baldness according to Norwood.

Most scalps at this stage have deep symmetrical recession showing at the temples that are bare or only sparsely covered by hair.

With stage 3 vertex, the crown is added since it’s a common occurrence with age. Hair loss is primarily from the vertex with limited recession of the front temporal hairline.

Recession at the front temporal areas is more severe than stage 3.

There is a decisive lack of hair on the crown. A band of moderately dense hair extending across the top separates the two areas of hair loss between front temporal and crown. This band bridges between the hair covered areas on the side of the head.

At stage 5 hair loss at the vertex region is still separated from the front temporal region but the division is much less distinct.

The band of hair extending across the crown is noticeably narrower and thinner. Hair loss at the vertex and front temporal regions are larger. When viewed from above, stages 5 to 7 show the remaining hair at the sides and back as a distinct horseshoe shape.

The bridge of hair that once crossed the crown is now been lost with only sparse hair remaining.

The front temporal and vertex regions are now joined into one area. Hair loss on the sides has extended further

This is the most advanced or severe form of hair loss.

Only a narrow band of hair in a horseshoe shape survives on the sides and back of the scalp. This hair may be fine and less dense than before. At the nape of the neck the hair is sparse with a semi circle over both ears