Minoxidil – What exactly is it? 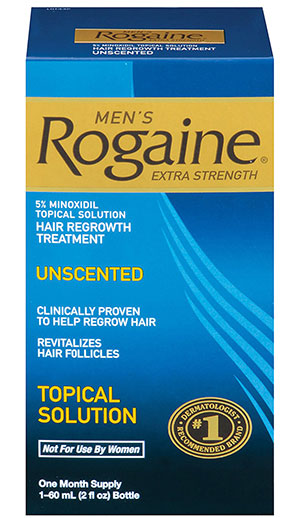 Minoxidil is an antihypertensive vasodilator medication, also claimed to slow or stop hair loss and promote hair regrowth. It is available over the counter for the treatment of androgenic alopecia, also known as male pattern baldness, however any improvements, if experienced, disappear in the months following discontinuation of treatment.

Minoxidil was first used exclusively as an oral drug to treat high blood pressure, however it was later discovered to have an interesting side-effect. Minoxidil may cause increased growth or darkening of fine body hairs. When the medication is discontinued, the hair will return to normal within 30 to 60 days. Upjohn Corporation produced a topical solution that contained 2% minoxidil to be used to treat baldness and hair loss, under the brand name Rogaine in the United States and Canada, and Regaine in Europe and the Asia-Pacific. Treatments usually include a 5% concentration solution that is designed for men, whereas the 2% concentration solutions are designed for women.

In 2007 a new foam-based formulation of 5% minoxidil was claimed to be as effective as the liquid-based treatment for male pattern baldness.

While the drug is available in the United Kingdom, it cannot be prescribed on the NHS, so patients must either buy it over-the-counter or have a private prescription.

How does Minoxidil work?

The mechanism by which minoxidil promotes hair growth is not fully understood. Minoxidil contains the nitric oxide chemical moiety, and may act as a nitric oxide agonist. Similarly, Minoxidil is a potassium channel opener, causing hyperpolarization of cell membranes. Minoxidil is less effective when there is a large area of hair loss. In addition, its effectiveness has largely been demonstrated in younger men.

Hair regrowth on the forehead areas can be aided by using minoxidil in conjunction with a microneedle roller, which allows greater penetration of the product. This usage can also aid the regrowth to the scalp.

Minoxidil is also a vasodilator. It is speculated that by widening blood vessels and opening potassium channels, it allows more oxygen, blood, and nutrients to the follicle. This can also cause follicles in the telogen phase to shed, usually soon to be replaced by new, thicker hairs in a new anagen phase.

The most widely known product to contain Minoxidil as its principle active ingredient, is Rogaine, known as Regaine in the UK and Europe. Other products also contain Minoxidil, such as Provillus solution and Hairmax Gel.

Previous Post
Provillus. What is it?
Next Post
Hot to Crop: The Cutting-Edge Style for Confident Men