Locks of Love event attracts an avalanche of donors

For some, having hair would be wonderful. But on Monday at Taylor Brooks Salon in Johns Creek, it was all about cutting it off to help those girls who suffer from long-term medical hair loss. 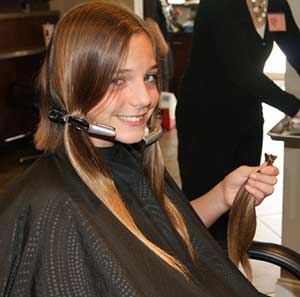 Locks of Love creates and provides custom hairpieces to financially disadvantaged children under age 21 suffering from long-term medical hair loss from any diagnosis.

Naomi Kolosna, a student at Medlock Bridge Elementary, said she saw the event in her school’s newsletter, so she decided to donate.

“My friends started doing it and it sounded really interesting,” she said.

Katie McGivney, 11, could be forgiven for being a little anxious as her ponytails were being cut. Her mother, Maryann, said it was the first time in six years she had her hair cut. Mom was there donating ponytails as well.

Her mother and sister helped get her involved.

“This is their third time now,” Katie said. “And I thought about it.”

Her reason for donating now? “Just the fact that I know I’m helping people,” she said.

Mandi Mitchell of Roswell was donating for the fifth time. 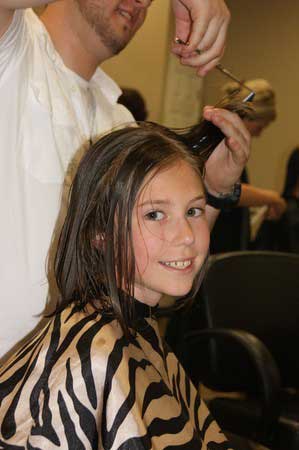 Not just kids donated their hair. Shirine Anderson of Milton was donating for the second time.

Diane Cooley and her daughters, 11-year-old Jenna and 13-year-old Emily – both students at Webb Bridge Middle School – are the organizers behind “It’s Just Hair.”

Jenna Cooley was diagnosed with Alopecia when she was 3.

Alopecia causes bald spots across the scalp and can develop into total hair loss including eyebrows, eyelashes and all body hair, Diane said. “Over the course of six months, Jenna continued to lose approximately 50 percent of her hair.”

In the past seven years Jenna has mostly grown back all of her hair, but she does experience mild loss that has been manageable.

Her mother and sister, Emily, decided to grow their hair to donate to Locks of Love. They donated their first ponytails in 2005. The mother and daughter decided to make it an annual event, and the “It’s Just Hair” cut-a-thon was born.

The first “It’s Just Hair” event was held in May 2007 and since that time the community has donated more than 500 ponytails to Locks of Love. The goal for Monday was more than 100 ponytails, and Cooley estimated they’d have at least 120 by the end of the day