Living With Alopecia – A Technological Revolution

Jana Bühlmann is used to strangers staring at her. Having been bald for almost three decades, the 41-year-old Burnaby resident is also used to people thinking she’s going through chemotherapy.

“People come up to me and say, ‘How are you doing?’ ” Bühlmann tells the Georgia Straight in an interview. “I’ll say, ‘Pretty good. How are you?’ Sometimes I’ll say, ‘You think I have cancer, don’t you? I don’t. I have an autoimmune disease called alopecia. Do you know what that is?’ ”

Alopecia areata affects men, women, and children of all ages and results in anything from patchy hair loss on the scalp to a complete lack of hair all over the body, according to the Bethesda, Maryland–based National Institutes of Health. Like other autoimmune conditions, alopecia occurs when the immune system mistakenly attacks healthy tissue. 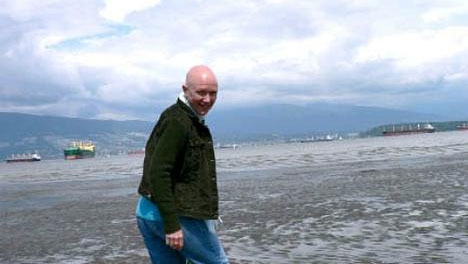 But as Bühlmann can attest, there’s much more to the illness than not having eyebrows, eyelashes, or body hair, as the case may be.

“It’s a social disease,” she says. “Hair loss is a symptom of the disease, and it has huge social implications. I can’t deny that the fact that I don’t have any hair affects who I am and how I see the world. You either isolate yourself or make statement, a ‘bald is beautiful’ statement.”

Bühlmann was living in Regina when she was first diagnosed at 14, but her memories of that time are blurry. She distinctly recalls, however, going to two dermatologists, who only offered so much help. One had her using Rogaine (aka minoxidil), a topical solution for baldness.

“If you’re 14, you put it on your head and lie really still because you don’t want to get it on your cheeks because if you do you’ll grow hair there,” she says of the foamy product. That didn’t suit her; nor did cortisone injections to stimulate hair growth, another common treatment. Other therapies, according to the NIH, include ultraviolet light, topical immunotherapy, and wigs.

“You have to do what’s right for you,” Bühlmann says. “At 14, injections weren’t working for me. There was no Internet then. I just remember thinking, ‘I feel totally alone.’ ”

Bühlmann, who works for the federal government and has a school-age daughter, has felt alone for a long time, even though alopecia is thought to affect about two percent of the population. However, she says something remarkable is happening as a result of technology.

“With the rise of social media, I’ve discovered a community that is revolutionizing itself,” she says. “Facebook and Twitter are full of individual ‘alopecians’ talking about the disease, and Facebook has become a means for long-standing alopecian organizations to share information and build community alongside a growing number of individuals who have taken it upon themselves to create awareness or support pages.”

She’s a member of Alopecia World, which she describes as Facebook for alopecians.

There are many other sources of support, she says, such as the Canadian Alopecia Areata Foundation. Global Alopecia Mission, meanwhile, is pushing for more research into a disorder it says is largely ignored by the medical community and society in general.

“Global Alopecia Mission is U.S.–based, but it’s gaining support and stirring up a normally sedate community by pushing back at the idea that this condition is ‘just’ about hair loss,” Bühlmann says. “This critical dialogue links with much of the awareness that is building in society about a more holistic approach to health and wellness, particularly in terms of…autoimmune conditions.

“After 28 years, my personal view of alopecia areata has changed significantly in the last month because…of the digital arena,” she adds. “It’s both exciting and humbling to acknowledge that there may be things I can do to take better care of my body, to manage an illness. I don’t know where this shift in perspective will lead me, but it’s very empowering.”

Raising awareness of the condition is crucial, and Bühlmann says this is happening as more and more people with alopecia go public with it. Take Toni Warne, a 34-year-old woman competing on The Voice UK; American teenager Olivia Rusk, who wrote the book Your Average Teenager, Who Happens To Be Bald, and who was featured recently in Seventeen magazine and is speaking out against school bullying; and Australian comedian Georgia Van Cuylenburg, who made a documentary about her trials with alopecia called Baby Let Your Hair Hang Down.

Then there’s the “bald Barbie” movement sweeping Canada and the U.S. Mattel has committed to making a limited number of hairless “friends of Barbie” for distribution through hospitals and the National Alopecia Areata Foundation.

“The next push is to get these dolls in stores so that children with hair loss can shop alongside other children for a toy they can identify with,” Bühlmann says.

Despite so many positive steps for alopecia sufferers, Bühlmann admits that it’s still hard for her to go out in public without a hat or a scarf on. (She tried wearing a wig but wasn’t comfortable in one.)

“It still feels vulnerable,” she says. “People look at you. You can have a very strong sense of self and still feel vulnerable.

“When you see someone without hair, remember there are a variety of reasons that could be,” she adds. “Not everyone who doesn’t have hair has cancer.”