Let Your Light Shine, But Not Your Scalp: INTRO 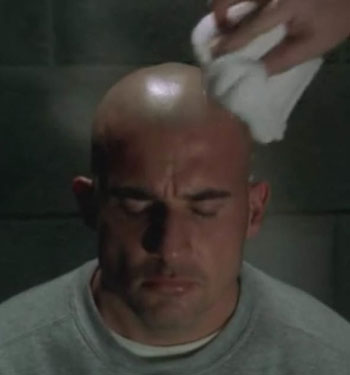 We take a look at what can be done to reduce that shine.

Recent conversations on the forum have members asking about what is the best matte lotion, or any lotion product for that matter, to be used to reduce the shine some are experiencing on their scalp. We at HIS certainly can appreciate the fact that there is a number of you who want the focus on your SMP treatment rather than your scalp’s ability to reflect light.

We want the focus to be on the finished product as well, so we’ve decided to do a little bit of re-search and provide those who are in need, interested, or just plain curious with a pair of upcoming articles about what products and grooming procedures can be done to help curb your gleam.

We’ve collected a handful of different products that are designed with the specific purpose with aiding in the shine control. While this isn’t an exhaustive list spanning the spectrum of the skin-care universe, it is but just a humble sampling of places to start. As always, we love the discussion and contribution, so if by the end of this series you don’t see a product that you use with success, then be sure to join the conversation and share it with the community.

With that said, lets cover a few basics.

The original idea was to simply pick a handful of different matte lotion products, pass out some samples around the office, and write up an article simply suggesting four or five of our favorites. But when the trip was made to pick up said samples, a simple conversation with a skincare spe-cialist opened our eyes to several things we initially overlooked.

Our research began at a local skincare line called Kiehl’s that has it’s own stand alone shop here in Los Angeles. Upon arrival, we were greeted by a skincare specialist who was eager to help us find the right product for our needs. We informed her that we were looking for a face/scalp lotion that would have a matte effect and dull the shine. Her first response, “Oh, you have oily skin.”

That statement, at the time, went over our head as she selected several lotions with specific oil-control properties for us to try. It wasn’t until later that we began to think more about the oil-control aspect of dealing with a shiny scalp.

Here’s the deal: our skin naturally produces oil, specifically on the face and scalp, called sebum (/SEE-bum/). Sebum is an “oily fluid responsible for keeping the skin and hair moisturized.” There’s no way for us to have our bodies to turn off this oil generating gland underneath our skin, nor would we want to. However, there are several things we can do to reduce it’s appearance.

Additional research put us in touch with a product rep from ZIRH, a men’s skincare line out of New York, who gave us some more insight on the oil control and sebum. He explained, the se-baceous gland (the gland responsible for the secretion of sebum) sits at the dermis layer of the skin, connected to the hair follicle and makes it way to the surface out through the pores.

This can be a major contributing factor the shine problem that some of forum members have talked about experiencing. The ZIRH rep told us that the oil-control starts at the CLEANSING of the scalp, not at the MOISTURIZING. As a follicle-y challenged man himself, he said it’s a two step process.

Over the next week, we’re going to provide you with a list of products, first for cleansing the scalp and a second for the right moisturizer to achieve the dulling effect we’re all looking for. Be sure to like us (because we like you) on Facebook, where we’ll announce that the upcoming ar-ticles have been published.