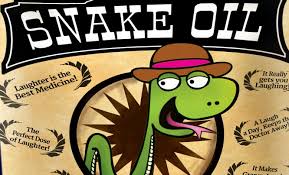 We suspect snake oil salesmen have been around ever since men started to go bald. The modern version advertises his wares on the internet, so how can you spot these hair loss scams?

Famously, in 19th Century America, the seven Sutherland Sisters, all with beautiful flowing hair, were used to advertise their father’s hair restorer. The scam worked because of the massive latent demand for a product that might prove beneficial. Looking back to a time when the pace of change, in the throes of the industrial revolution and the growth of the railway, was dramatic, it must have been entirely believable that science had cracked the problem of hair loss.

You might like to think that in the enlightened 21st Century we would be over that. Anyone with access to the internet, which is almost everyone, and 20 minutes spent researching the matter, should arrive at some sensible conclusions. That science is working hard on finding the solution but are not there yet. When we say science, we mean some of the world’s largest pharmaceutical companies along with a rash of young biotech start-ups investigating various aspects of the process. What has become much better understood through this process is the serious complexity involved in hair growth with over 200 genes identified as involved.

Despite all this the market for modern snake oil is unabated. So how do they continue to operate successfully?

The market has moved on since the days of the Sutherland Sisters. Apart from posting adverts in newspapers across the country to attract mail order customers, Mr. Sutherland would drag his daughters around the land and sell his tonic from the back of his cart. These days the internet has supplanted the need to leave home to sell anything and is where the modern scammers are doing their business.

Almost invariably, the adverts will appear under the heading “sponsored articles from around the web”. There are a handful of key phrases to look out for too… “Magic Hair Growth” “Get Your Hair Back” or “Do Not Get A Hair Transplant Till You Have Tried This”. Open the advert and the offer will fall into one of two categories. The first is an ancient cure, used for millennia by an Amazonian tribe or somesuch. The other is pseudo-science, where the claim is to have unlocked the door to a full head of hair using some technological advance.

Click on one of these adverts and you will be taken to a fake news site. Featuring testimonials, sometimes using celebrities. Pay the advertised price and you are likely to discover that a much more significant sum has been liberated from your account under something like a membership charge, in addition to the modest fee charged for the hocus pocus cure.

It is a relatively easy thing to protect yourself from. Google the company name and or product you are looking at, try adding the word “scam” to your search to see what comes back.

Hair loss, along with weight loss, are commonly targeted as markets for the scammers, but they do not restrict themselves to these relatively benign groups. Others offer cures for serious illnesses like diabetes. The same rules apply, do your due diligence to avoid being caught out.

Previous Post
Risks Associated With Cheap Hair Transplants
Next Post
Are JAK Inhibitors The Hair Loss Cure We Have Been Waiting For?