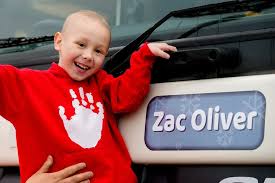 A four-year-old cancer sufferer has penned a letter to Father Christmas, which features a heart-wrenching request for curly hair.

Zac is your typical four-year-old boy, he enjoys all the things any four-year-old boy enjoys. When he sat down to write his letter to Father Christmas he marked himself out as different, and Zac is different. He suffers from a rare form of cancer, called near-haploid strain of lymphoblastic leukaemia. Fortunately, since his diagnosis in May, following a fund-raising effort led by UK newspaper the Daily Mail, which included a single anonymous donation of £100,000, the £500K needed to fund his treatment was raised. In fact, the total raised to date stands at over £600K with any surplus, once Zac’s own needs are met, being used to fund research into childhood cancer.

The huge costs involved are due to Zac having to travel to Philadelphia in the USA to receive a course of revolutionary immunotherapy, a new way of treating cancer that is highly efficacious for some types of the disease. The chronology of Zac’s treatment has been, since his diagnosis back in May, one of a particularly harsh form of chemotherapy. In November he made his first visit to Philadelphia where some of his T Cells were harvested. They are currently being “modified” in the lab and will, in about 5 weeks time, be reinfused back into his system.

Around the time the family put up their Christmas tree this year, Zac’s hair began to fall out faster than it had been, a process which started back in June with the chemo.

When it came to dictating his letter to Father Christmas he opened by asking after Santa’s health. He then reassured Santa that his mum had said he should be on the good list before setting out his requests for presents. The first two, predictably, were dinosaurs and an age-appropriate game called PAW Patrol. Then there was the third and last request, for hair. which he added he would like to be curly.

It is impossible not to feel for this lion-hearted boy, who has never uttered a word of complaint since the day of his diagnosis, and his poor mum and step-dad. Through it all, and even at the tender age of 4, it is losing his hair that prompted the single complaint. Even then Zac did not really complain, just made an honest request of someone who, for all he knows, might actually be able to deliver him from hair loss.

I’m sure our readers will join us in wishing Zac and his family a wonderful Christmas,  and many more. Good luck through your journey.