Have you seen Hairgen in your local Boots store? 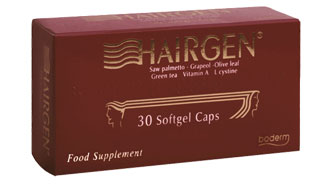 Hairgen is a new three course treatment that has come onto the market recently, and is stocked by Boots who have had a huge response to this new product which sold out within days and still has a waiting list of around 6000 people 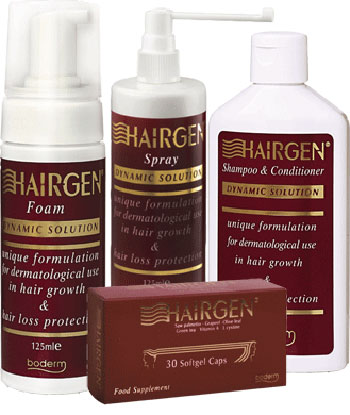 The Hairgen treatment consists of a shampoo, a spray and a supplement and is said to inhibit DHT (dihydrotesterone) which is a hormone that destroys hair follicles and is the major cause of pattern hair loss (androgenic alopecia). It contains an active ingredient known as saw palmetto which is plant extract that is thought able to block DHT.

The shampoo and spray are applied directly onto the scalp and the supplement is in the form of a capsule that has been developed by Concept Health Care to slow the production of DHT. There is, however, no clinical proof at this stage and it has not been approved by MHRA or the FDA, the two medical authorities in the UK and America who are responsible for licensing medical products.

For men it has been proven that 95% of their genetic hair loss is down to the hormone DHT and whilst this may play a part in women’s pattern hair loss it is not the total story as there are more complications. Research brings many different theories and treatments in helping to control hair loss and while some of the may seem to work there may be other factors that are helping regrowth. For instance, it may not be genetic it could be down to stress, illness, medication or other factors when hair will grow back of its own accord once the complaint is sorted.

Alongside common treatments such as minoxidil and finasteride, diet supplements can also be used to ensure the protein vitamins and minerals that are required by the body to function properly are sufficient. Laser treatment is also available and works by lasers and LED lights working on the scalp to apparently stimulate hair growth, although reviews are mixed. The laser comb has been approved and has shown some success for some people.

It is important to recognise that despite the hype, Hairgen is no miracle cure for hair loss. Ultimately it claims to inhibit dihydrotestosterone, as do a great many other solutions, and it also contains saw palmetto, as do many other treatments. Hairgen does bring the two together in a combination that is not quite as common, but similar products have existed for a long time and have not been hailed as a ‘cure’.

We believe Hairgen stacks up well against competing products, but just be careful to manage your expectations.