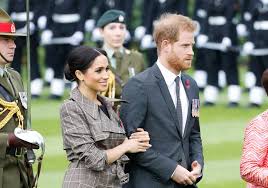 Prince Harry took his new wife on their first official tour, to New Zealand. They were widely well received but one section of the media got caught up in speculation on the Prince’s hairline.

It’s an everyday story of Prince meets actress and marries her. Except that the Prince in question is the youngest son of Princess Diana and the actress is an African American TV star. In a world that seems ever more divided along nationalist and racial lines the warmth with which Meghan was received by the British public, not to mention the press, was inspiring. The future of the British Royals is in the hands of a generation that are more connected to the world they live in, something they were in desperate need of. Prince Harry served his time in the forces, as is required for any young royal regardless of suitability (just ask his Uncle Edward). On leaving he spent some time letting his hair down, lewd photos popped up in the media of just how much fun he was having and there must have been some consternation back at Buckingham Palace, concerns he might follow the path of his Uncle Andrew and become a ligging playboy… something Uncle Andrew seems to have got away with his entire life but would have been an issue in the modern world of social media and instagram.

Fortunately for his family and the general health of royalty in Britain, it would seem he met his perfect match in time to save him from a life of jet travel and partying. He bought his fiancee back to meet the parents who, it seems, were completely charmed and the pair married in a lavish ceremony watched the world over. Now, it was pretty obvious on his wedding day that Harry was headed down the same road as his elder brother as far as his hair is concerned. The scalp at the crown was clearly visible and there were a handsome pair of “widows peaks” appearing at the temples.

The first official tour for the young couple involved a trip to New Zealand. It went superbly well, they charmed their hosts and the public everywhere they went. Unfortunately, the press, and particularly the British press, get a little bored of running the same happy story day after day. So it was that the Daily Star, that paragon of press standards, ran an article speculating on Harry’s hair future.

They picked the brain of UK doctor, Asim Shahmalak. The good doctor told them that the rapid advance of Harry’s hair loss, which he pointed out now extended across the back of his head, meant he could expect to be completely bald by the time he hits 50. Which seems to ignore the progress of his older brother who achieved that stage of baldness by a much younger age.

The doctor suggested that unless he takes action now his fate is sealed, that unless he opted for a hair transplant, which the doctor declared as his only viable option, he had no chance of saving his locks. He also suggested a couple of other options, like using dye to darken the hair and help disguise the thinning… though we are not sure how well that works for red-haired chaps. He did however point out that happy, settled men often relax on a previously more studied approach to disguising their hair loss.

It is a shame that even in the midst of a tidal wave of positive feelings towards the couple that the press elected to run this article. It is not as though there was a shortage of material as they were on tour with photo opportunities a daily event.

We would massively dispute the doctor’s conclusion that a hair transplant might be a permanent solution for Harry too. If he does end up a young Norwood 7 like his brother then he would soon be left with visible scarring and a new set of problems to contend with.

Previous Post
Just How Far Off Is A Hair Loss Cure? The Conclusion
Next Post
Hair Health Changes We Should All Make