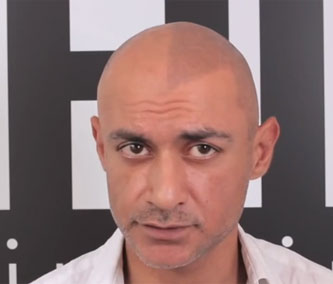 We’ve had a lot of people ask about the man with the half shaved head, so we thought we’d explain to those who might have missed it.

Gurnam Sandhu is a client of HIS who worked with us to provide the best possible demonstration of the illusion created by MHT.

It can sometimes be difficult to gain a true and accurate insight based on before and after photos alone. This is for many reasons, but primarily because the two sets of photos are taken at different times, resulting in different lighting against different backdrops, with the camera set to a different level of focus.

In effect, the man with the half shaved head is a “before” and “after” shot on the same guy at the same time.

Below is a video we created before Gurnams treatment

Following Gurnams half shaved head treatment, we posted another video:

A large photo of Gurnam can be seen via this link

Following Gurnams half-head treatment, we received a great deal of interest in our technique as his case study clearly demonstrates the difference scalp micropigmentation can make, in the most visual way possible. Amongst these were several requests to see his completed treatment, as clearly we couldn’t leave him with half a treatment for too long! So here it is, Gurnams completed treatment video:

Previous Post
Hair loss concealers versus scalp micropigmentation
Next Post
What are the options after your treatment?