What causes hair loss in women?

One of the most common forms of hair loss in women (and men) is a condition called telogen effluvium, in which thinning hair is diffused (or widely spread out) around the scalp and elsewhere on the body. This is usually a reaction to intense stress on the body’s physical or hormonal systems, or as a reaction to medication.

The condition, which can occur at any age, generally begins fairly suddenly and gets better on its own within about six months, although for a few people it can become a chronic problem. Because telogen effluvium develops a while after its trigger, and causes generalised thinning of hair density rather than a bald patch, women with the condition can easily be diagnosed as overanxious or neurotic. Fortunately, it often gets better with time. 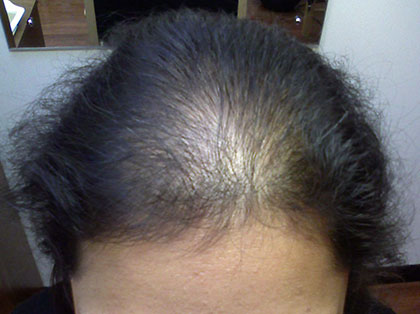 Telogen effluvium is a phenomenon related to the growth cycles of hair. Hair growth cycles alternate between a growth phase (called anagen, it lasts about three years) and a resting phase (telogen, which lasts about three months). During telogen, the hair remains in the follicle until it is pushed out by the growth of a new hair in the anagen phase.

At any one time, up to about 15 per cent of hairs are in telogen. But a sudden stress on the body can trigger large numbers of hairs to enter the telogen phase at the same time. Then, about three months later, this large number of hairs will be shed. As the new hairs start to grow out, so the density of hair may thicken again.

Many adults have had an episode of telogen effluvium at some point in their lives, reflecting episodes of illness or stress.

Another common type of hair loss in women is androgenetic alopecia, which is related to hormone levels in the body. There’s a large genetic predisposition, which may be inherited from the father or mother. Androgenetic alopecia affects roughly 50 per cent of men (this is the main cause of the usual pattern of balding seen as men age) and perhaps as many women over the age of 40.

Research shows that up to 13 per cent of women have some degree of this sort of hair loss before the menopause, and afterwards it becomes far more common – one piece of research suggests that over the age of 65 as many as 75 per cent of women are affected.

It depends on individual circumstances, however yes, MHT® can provide solutions for hair loss in women. Primarily, this takes the form of pigmenting the scalp with micro hairs, to make the head of hair appear thicker and fuller, in much the same way we apply the technique to scalps that have been subject to a hair transplant.

If you are female and suffering from a form of hair loss, we may be able to help. Please contact us for an informal discussion.