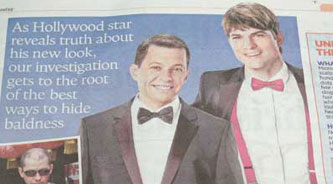 Their research into the various options available follows two high profile reveals, whereby Hollywood a-listers Jon Cryer and Ashton Kutcher have discussed openly their use of hair loss camouflage products. This is quite a breakthrough, because although celebrities such as Wayne Rooney and Christian Jessen have been happy enough to discuss their hair transplant procedures, the use of other products such as toupees and shake-on concealers are still very much taboo for a lot of people. 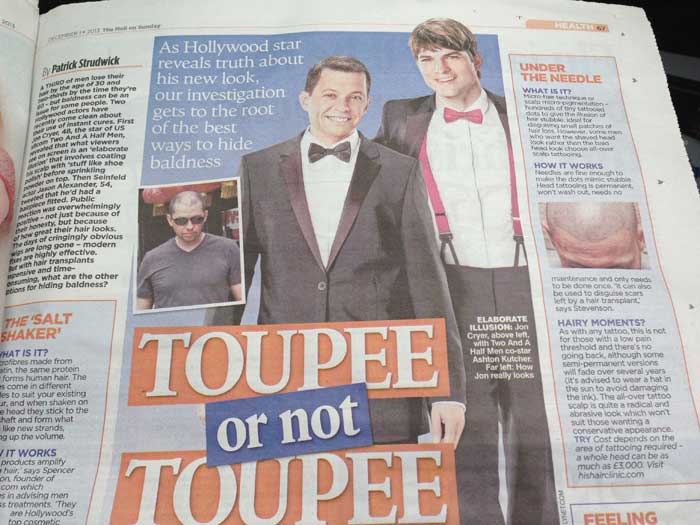 Also a significant breakthrough is the acknowledgement by the Daily Mail that scalp micropigmentation is a viable option for hair loss sufferers. Despite the fact that more than 10,000 men have received SMP treatments at HIS Hair Clinic, it has taken mainstream media a while to understand that SMP is just as good an option as more traditional alternatives such as hair transplant surgery, toupees or drugs like minoxidil and finasteride. Nevertheless, a steady trickle of media interest has turned into a flood in recent years, and this article is yet another example of changing attitudes towards SMP.

So is this an out and out recommendation by the Daily Mail? Perhaps not, but it certainly represents an implied acceptance that SMP is among the best options available.

The Daily Mail argues that “The all-over tattoo scalp is quite a radical and abrasive look which won’t suit those wanting a conservative appearance”, however writer Patrick Strudwick goes on to say “Needles are fine enough to make the dots mimic stubble. Head tattooing is permanent, won’t wash out, needs no maintenance and only needs to be done once. It can also be used to disguise scars left by a hair transplant”.

Although not an outright endorsement, as part of our ongoing effort to raise awareness of Scalp Micropigmentation techniques for hair loss we certainly appreciate the exposure, and the mention. Thanks Patrick!