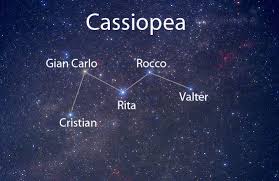 Biotech firm Cassiopea have seen their shares rise 90% since announcing phase 2 results for Clascoterone, is this a hair loss cure?

Cassiopea was the name of a Queen from Greek mythology. By reputation very beautiful, very vain.. the Greek God of vanity if you like. These days she might be familiar to you if your hobby is astronomy, she has a constellation named after her. It is also the name of a start up Italian biotech business who caused a bit of a stir last week. Their stated aim is to produce innovative topical, the topical part is important, treatments for acne, androgenetic alopecia and genital warts. These three issues have a couple of things in common, a large patient population and a relatively small target group to sell their products into.. essentially dermatologists.

Clascoterone has been on the radar for a few years now. Under the tentative brand name of Breezula (we can only think they haven’t spent much time on it yet) they are aiming to come to market with a product aimed directly at treating male pattern baldness through the use of a topical cream. In a pilot scheme in 2011 for an ointment based on Clascoterone, it’s anti-androgen properties were being tested for it’s efficacy as a treatment for acne. The results were great, showing a significant improvement on the current drug on the market and that the drug was very well tolerated… meaning they saw few side-effects.

As of the recent announcement by Cassiopea we have learned that the Phase II study of the cream under development as their androgenetic alopecia treatment is going well. The half-time report, at 6 months in is showing an uptick in perfomance against Finasteride, the only existing topical FDA approved treatment… which itself has been associated, in it’s oral form, with hormonal imbalances that can mean a range of problems for men and prevent it’s prescription for women altogether.

We look forward to the final report in another 6 months, and hope that the measures hold up.  The interim data shows that it is on target to achieve it’s primary goal of outperforming finasteride, but there was a second measure which was less definitive – but even that measure favoured treatment. This gives us mild cause for concern, based on the possibility that what comes to market will be an improvement on finasteride but only because of the reduced side-effects. Not that we would want to underestimate the importance of that to our community, just that we would prefer to be talking about something that is a substantial improvement in terms of actually producing new hair, lots of it!

Previous Post
Lewis Hamilton’s Hair – What Goes On?
Next Post
What Can A Woman Do To Avoid Hair Loss