Toy company Mattel has announced plans to add a bald Barbie doll to its line-up in order to help children suffering with hair loss.

It is in response to an ongoing Facebook campaign urging Mattel to launch a hairless doll that children battling cancer and other diseases can relate to. 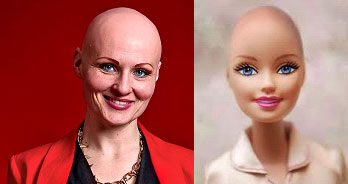 The Beautiful and Bald Barbie Facebook page now has over 150,000 likes.

Initially, Mattel told campaigners that they do not take unsolicited Barbie doll ideas from outsiders however it appears persistence paid off in the end.

The toymakers says the new doll will be a friend of Barbie and will come with the usual glamorous accessories including wigs, scarves and hats.

However, unlike Barbie, the doll will not be stocked on store shelves but will be given directly to children affected by hair loss.

The company says it will also give dolls to the Children’s Cancer and the National Alopecia Areata foundations.
Production is set to begin next year.

The news comes shortly after Alopecia sufferer Toni Warne, 34, blew the judges away with her rendition of Will Young’s ‘Leave Right Now’ on the first episode of BBC1’s The Voice.