A spate of bad SMP reviews – what’s the real story? 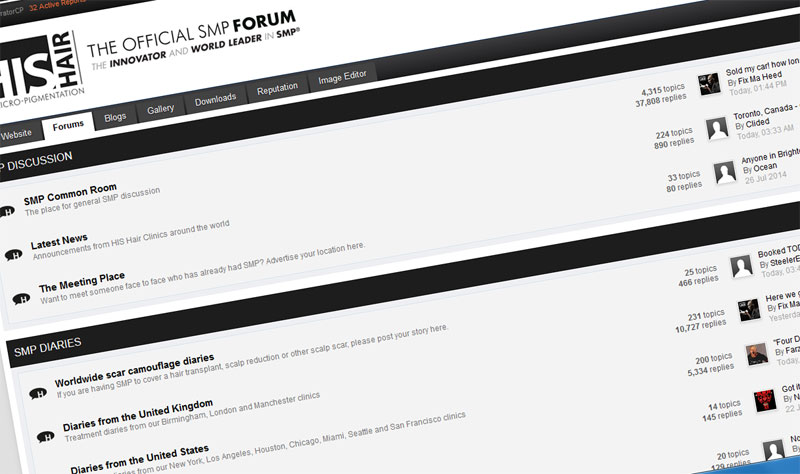 Just recently there has been a number of negative discussions taking place in our forum. Whilst only one of these involves a HIS client, and his issue really isn’t an issue at all, I wanted to provide information for those who may be concerned about what they have read.

I refer to the following discussions on our forum. It is important to note that these are not complaints from HIS clients, but comments about scalp micropigmentation in general, or treatments received elsewhere.

Unfortunately this is a common complaint, and is usually the result of inexperienced or rogue providers using the wrong pigments. There are exceptions, for example when the right pigment is used but it is deposited too deeply within the upper dermis, but the usual cause is the use of tattoo inks or permanent makeup pigments being used. These materials are completely inappropriate for scalp micropigmentation treatments. For more information please see this comprehensive post.

General “do not tattoo your head” advice

Scalp micropigmentation is a highly advanced hair loss treatment for balding men. Unfortunately many would-be entrepreneurs do not realise or appreciate the complexities of the process and think they can replicate our results with very little experience, and without proper training. This has resulted in a number of bad results that people are having to live with. Such has been the extent of the problem that HIS now offers remedial treatments to reverse the work of these practitioners.

For many years, the world of hair loss has been saturated with bad, commercially-driven advice. Within this advice is the constant promotion of hair transplant surgery, hair systems, pills and concealers, solutions that in many cases, do not deserve the positive PR they have received. Some people, particularly members of major hair loss forums, have become so indoctrinated by this “hair transplant or bust” attitude that they find it hard to accept any other remedy as being comparable or even viable. The bad results I refer to has given them the perfect ammunition to suit their viewpoint.

There are good and bad SMP providers, just as there are good and bad hair transplant surgeons. HIS Hair Clinic is by far the world leader in this type of hair loss treatment, and we are proud of the excellent results we achieve for our clients every day, and have been since we began operating in 2002. Our solution is now recognised by the British NHS, a testament to how effective SMP is when applied in the right way.

This is a highly emotive subject of course, so it is no surprise that this discussion has gained a lot of attention. The question is not whether SMP causes cancer or not, but if there is a link between cancer and regular tattoos.

There is no conclusive proof to confirm an answer to this question either way, however as I stated on our forum:

My comments were swiftly followed by HatingHats, a highly respected member of our forum and a Professor of Biomedical Engineering, who added the following:

Before I began SMP, several former clients would post to me about how everyone has tattoos now and it is no big deal.  That did absolutely jack shit to help alleviate my concerns. I do not know if you are a big fan of mathematics and statistics, but you probably know that their are several statistical measures of confidence and correlation. While you are correct that not enough reliable double blind studies have been done concerning cancer and tattoos (or SMP), we do know that about 37% of all people between the ages of 25 and 40 have a tattoo. If their was even a minor correleation, it would have begun to show up in mathematical epidemiology studies in the early 2000s period (for reasons that would take too long to go into here). (just as a link between smoking and cancer immediately showed up mathematically in the mid 1950s before formal double blind results came in).

As such, I do believe there is a minor risk but I would take a seat of my ass guess that the correlation is going to be similar to something like the link between drinking too much Coke or Pepsi and cancer. When much more detailed information is available in perhaps 2030 or 2040, I suspect we will find that there is indeed a link but one of small effect.  And that means, that yes, SMP is in actuality a Vegas dice roll.  But so is driving at 90 mph.  Everytime the sports car enthusiast gets his ride up to high speed, there is that chance that a tire could blow out and send him to the afterlife.  It is small but statistically real.  The same I suspect is true of SMP.

Finally, I would note that you did not account for placebo effect and positive correlation. There is a well known mathematical relationship between say depression and higher likelyhood of cancer.  If your hot lady starts sleeping with a better hung dude with more money, you have about a 240% greater chance of developing cancer. Likewise, disease is very much a condition of the mind. If you are a depressed Norwood IV age 22 year old gent who feels life is over because your already balding and you receive SMP and begin to get laid, the cancer risk takes a dramatic drop.  The positive mental placebo effect during the lifetime of SMP must be weighed against the chance for cancer.  My guess would be that it is (statistically speaking over a large enough population sample) better for most gents to receive SMP, feel better about themselves and live a longer more fulfilled life than one without SMP, inwardly depressed and with an actual longer term risk for cancer.  I do not have the evidence to say that for sure, but it would be the seat of my pants, best ass guess.

So what is the conclusion?

Bad SMP results do exist, and they are reported as reviews on various hair loss forums. The reality is that hardly any of these involve HIS clients, despite the fact that we have treated significantly more clients than any other provider. Why is this? Because as the original developers and pioneers of this treatment, we know how to apply it better than anyone else in the world. We use specialist pigments and equipment and invest huge amounts of time and money into the training and retention of the worlds best SMP practitioners.

As for the safety of our treatment, we have treated tens of thousands of men from around the world without any safety-related reports. I believe HatingHats is right when he says the chances are probably miniscule (comparable to “drinking too much Coke or Pepsi”), and I stand by my statement that millions of men around the world have tattoos, and we are yet to hear of a tattoo-related cancer epidemic. Given that our SMP pigments contain a tiny fraction of the metal oxides found in tattoo ink, the chances are most likely even more insignificant.

This post is published for the purposes of transparency and to answer some of the questions raised on our forum. If anyone would like to discuss its content further, please feel free to contact us.

Previous Post
What to Expect…in between your first and second session.
Next Post
Why you should meet someone who has already had scalp micropigmentation