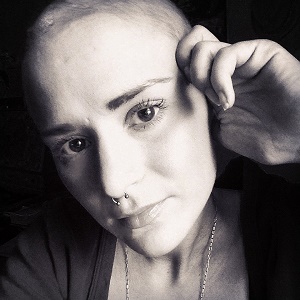 A shaved head can be a great look – it has the potential to accentuate a perfectly formed skull and make the facial features really pop. For those who choose this style – all kudos to them – but if it’s not a style choice, and you’re doing it because it’s better than what you have, it’s little compensation. When what you’ve lost, and what you’ve had no control over, was a fabulous mane, a buzz cut can be a little depressing. If you have it, you can do what you like with it; but when you lose it, you are losing what was part of your identity – something you spent years shaping.

This was the struggle that Imgur user GeniusesGoingWhee (Samantha to her friends) faced when her hair began to fall out in patches and she was diagnosed in 2007 with alopecia areata. She spent much of her young life trying to come to terms with the disease, battling to maintain a positive attitude, but says it was hard when it was the long hair she used to have that gave her the “outlandish personality and self-confidence” that characterised her.

Sam opted for a shaved head once her hair became too patchy to tolerate, but she struggled emotionally with the social impact of this decision, as much as she had with the constant hair loss. Unable to afford the “full cranial prosthesis” that her health insurance company wouldn’t fund, she wore a lower quality wig for a while, but even this presented challenges that she hadn’t been prepared for.

The cheaper wig soon deteriorated so much that Samantha made the decision to create a GoFundMe page in order to raise the money she needed to pay for the hairpiece that she believes will get her back to her old self again – confident, gregarious, and outgoing. Her story touched the hearts of many readers, and within two days, her wig fund – https://www.gofundme.com/SammyAlopecia – had already exceeded her $2,200 target, and her story had gone viral, reaching readers around the world.

What is alopecia areata?

Alopecia areata can run in families, or it can occur in families that have experienced other autoimmune disorders, such as diabetes, lupus, or thyroid disease. While it tends to be more common in adults over the age of 30 and younger than 60 years, it can affect younger people – like Samantha – and much older people too.

Is there a cure for alopecia areata?

Unfortunately, there is no known cure for alopecia areata, but it can be treated using steroid injections, creams, and shampoos. However, their effectiveness is limited, and cosmetic management – such as with a “full cranial prosthesis” or wig, like the one Samantha fundraised for – is considered the best long-term solution.