A new cure for alopecia areata? 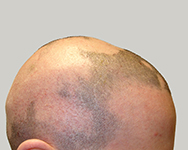 Denis is a twenty-six year old male who initially thought he had male pattern baldness. A friend at the gym noticed a bald area the size of a coin one day that gradually developed into more spots over the course of a few months. It started to appear more randomly on the sides and back of his head until it slowly took over his life. This was diagnosed to be a case of alopecia areata causing him to start shaving his existing hair off in the hope of concealing his baldness.
Denis became so uncomfortable with his situation that he could not even take his cap off in one-on-one situations. He had to keep it on ninety percent of the time because of the self-consciousness that hair loss has caused him to feel. There would even be social occasions where being able to wear a hat became a primary consideration before attending. He feels that being able to be free from thinking about these details would be a massive release for him mentally.

Scalp micropigmentation was something that was mentioned to him by a friend. He went online to research about it more and came across HIS Hair Clinic. It was the one that had the best feedback making Denis feel the most comfortable with it. He just wanted his look to become more uniform in appearance even though he understood how tricky alopecia areata could be. Feeling normal again is basically what he was hoping for. It was something that he lost due to the drastic change his hair loss caused in how he looked.
Denis felt fantastic after he received his scalp micropigmentation procedure. He was surprised at how fast it took to complete. It was as simple as coming in to get the treatment and going out looking like he had hair once again. Most importantly, it gave him the freedom to go about without having to consider wearing a hat anymore. He no longer needed to feel self-conscious wondering what people thought about his baldness. It liberated him from his anxiety and brought a smile to his face once again.
He also detailed how the procedure felt as the pigments were being layered upon his scalp. There were some areas that actually felt pleasant him, even relaxing. Other places on his head were admittedly more sensitive. There was some physical pain that lasted momentarily, nothing more. Whatever he had to experience however was worth what he received in return. Denis really felt his quality of life improve after receiving scalp micropigmentation. He was able to walk out of the clinic right after the first out of four sessions without the need for a hat. Just not having to think about putting one on was a huge development for him.
Denis’ advice for people who have alopecia is to remember that they have an option available for its treatment. Balding is something that does not discriminate upon those it will affect. Scalp micropigmentation can effectively fight against the appearance of losing hair. Simply coming in for consultation will help inform those who are in need of such services. Denis highly recommends scalp micropigmentation to anyone. It liberated him from his emotional burden and unlocked the door on his life again.